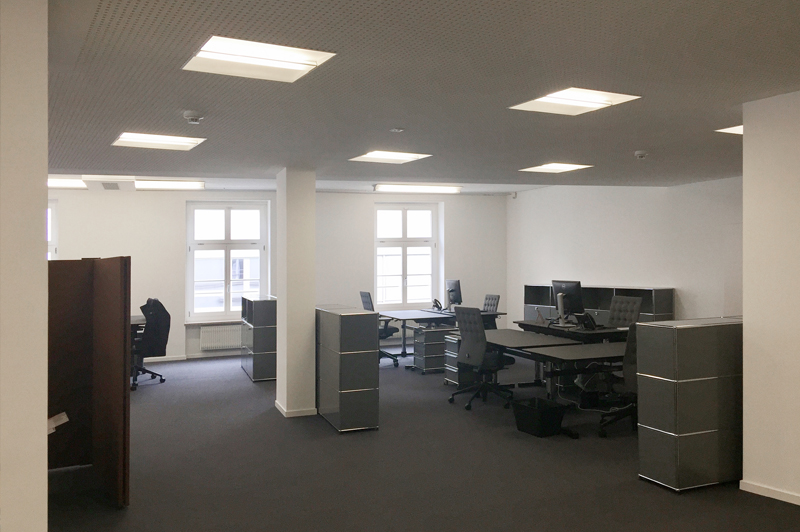 The 2nd floor of the building at Freie Strasse 70 / Kaufhausgasse 5 in Basel, which has been rented by Bank E. Gutzwiller & Cie. since 2018, was converted into an office floor. The main premises of the bank are located at the directly adjacent Kaufhausgasse 7.

The conversion of the office space included the enlargement of the meeting room facing the inner courtyard and the creation of an additional two-person office in the current OpenSpace - Office. In order to improve access to the remaining bank premises, an already existing breakthrough to the building at Kaufhausgasse 7 was restored. The new offices were connected to the cooling system already built for the COS store. 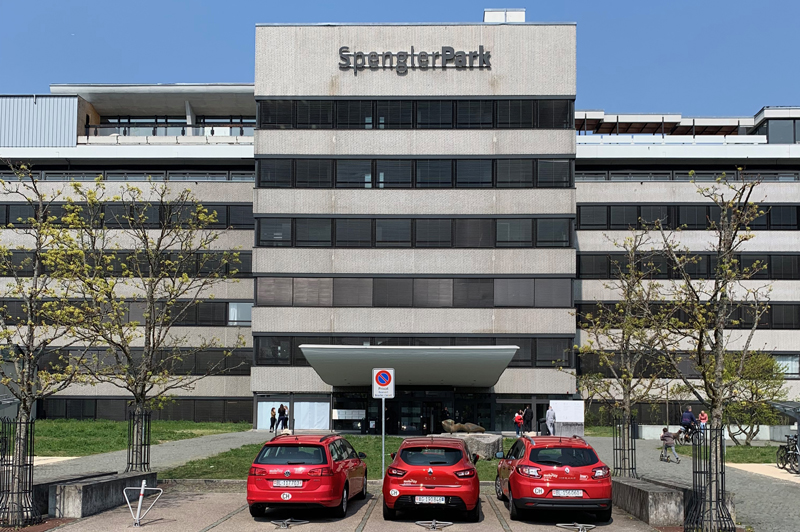 The Spenglerpark in Münchenstein consists of the three buildings A, B and C with a total usable area of approx. 80'000 m2. The total renovation of building A requires various tenant rochades planned by Blaser Architects.

The company Chemgineering will receive a new open space office on the 4th floor of building B on approx. 3'000 m2. The logistics company UPS, with 1'600 m2 of space, moves into the 1st floor of House C with its 130 workstations. On the first floor of House B, the companies will move into their warehouses, sales areas and workshops after the conversion of the loading ramp.

The building application will be submitted in April and construction will start at the beginning of 2021. In June 2021, the areas will be ready for occupation so that the 2-year conversion of building A can take place rent-free. 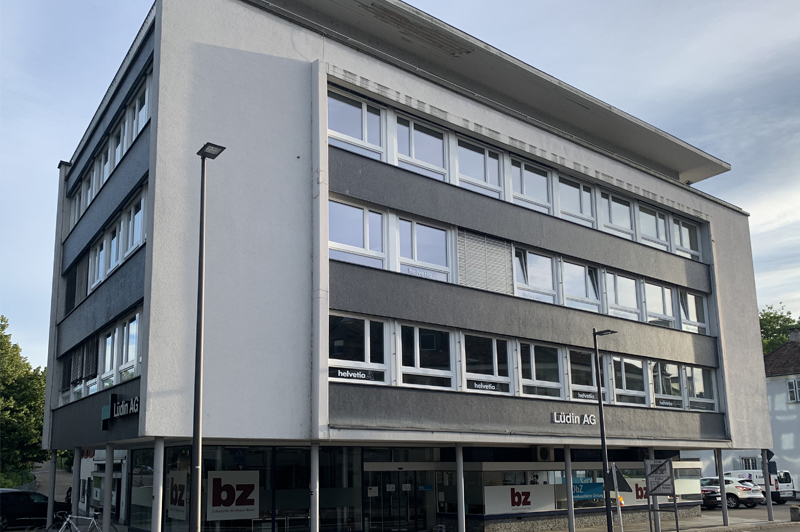 Lüdin AG has sold its site between Bahnhofstrasse, Rheinstrasse and Schützenstrasse in Liestal ("Lüdin Site") to Credit Suisse Real Estate Fund SIAT. The owners intend to plan and realize an attractive residential development and service areas on the site on the basis of the urban development guideline project.

Blaser Architects, as local architects, together with the New York office Karpf Khalili Architects and the landscape architecture office CZ Studio Associates from Venice, are actively involved in this interesting and important development for Liestal within the framework of an anonymous invited project competition. 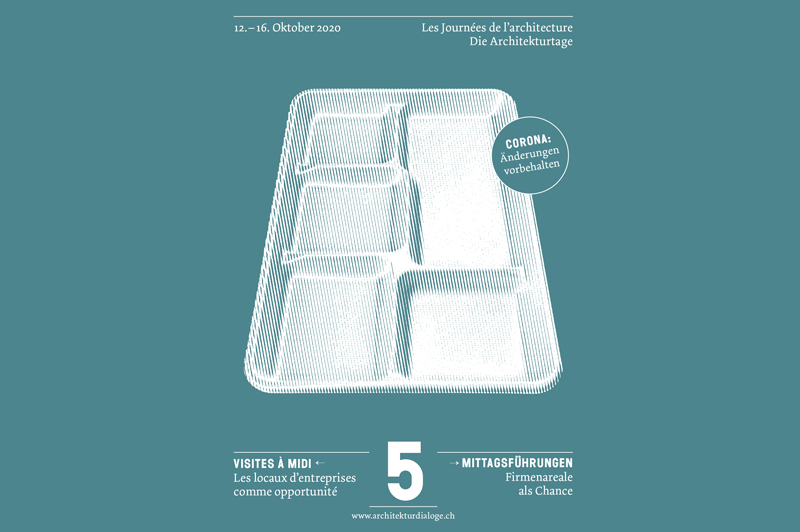 From October 12 to October 16, 2020, ArchitekturDialoge will organize various lunchtime tours as part of the Architecture Days in Basel. This year's theme is 'Company premises as an opportunity'.

Company premises have been shaping the Basel area for decades. They are an important spatial and architectural resource for the identity and development of our city. What opportunities are offered by their conversion or construction? We will visit five sites and invite five dancers who will present their view of the buildings in a performance.

You will find the exact program soon under: www.architekturdialoge.ch 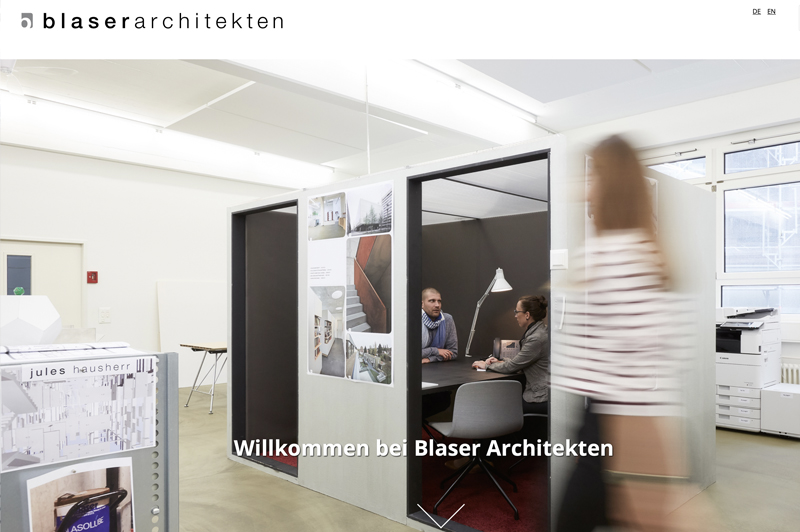 Our revised Blaser Architekten website is online as of today - with a new design and slightly modified structure.

The structural revision of the homepage reflects the diversity and individuality of our office. The website also serves our internal history and was provided with project and office data for internal use. The web relaunch was developed, designed and realized with Iwan Raschle, Raschle & Partner, Atelier für Gestaltung und Kommunikation, Bern. We hope you enjoy browsing through our website. 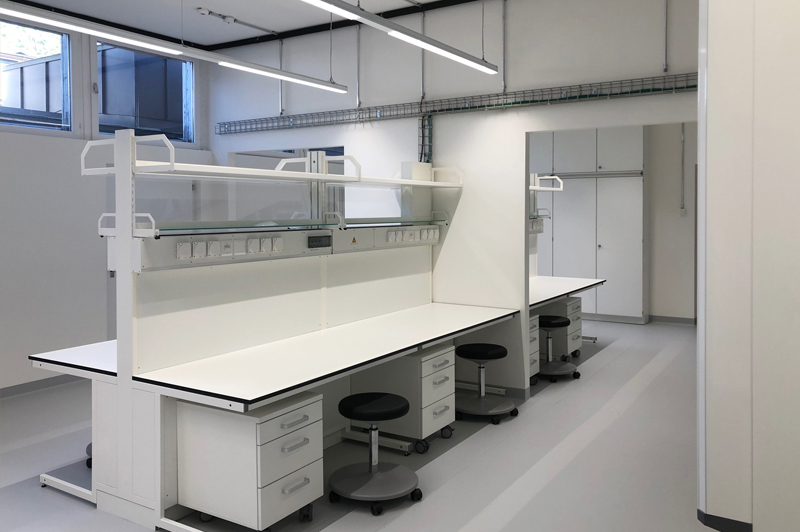 As a temporary solution, we built three botany laboratories for the PMI (Plant Microbe Interaction) department of the University of Basel into existing offices on the 2nd floor of the historic, listed Bernoullianum. In addition, the warehouse and archive, also on the 2nd floor of the unprotected annex, were converted into an open-space office, so that the necessary workstations for the new laboratories could be provided. At the same time, we renovated existing laboratories for Quaternary Geology on the ground floor and basement and modernized the equipment also with regard to the new research activities. The new rooms could be handed over to the users on time and within the estimated budget. 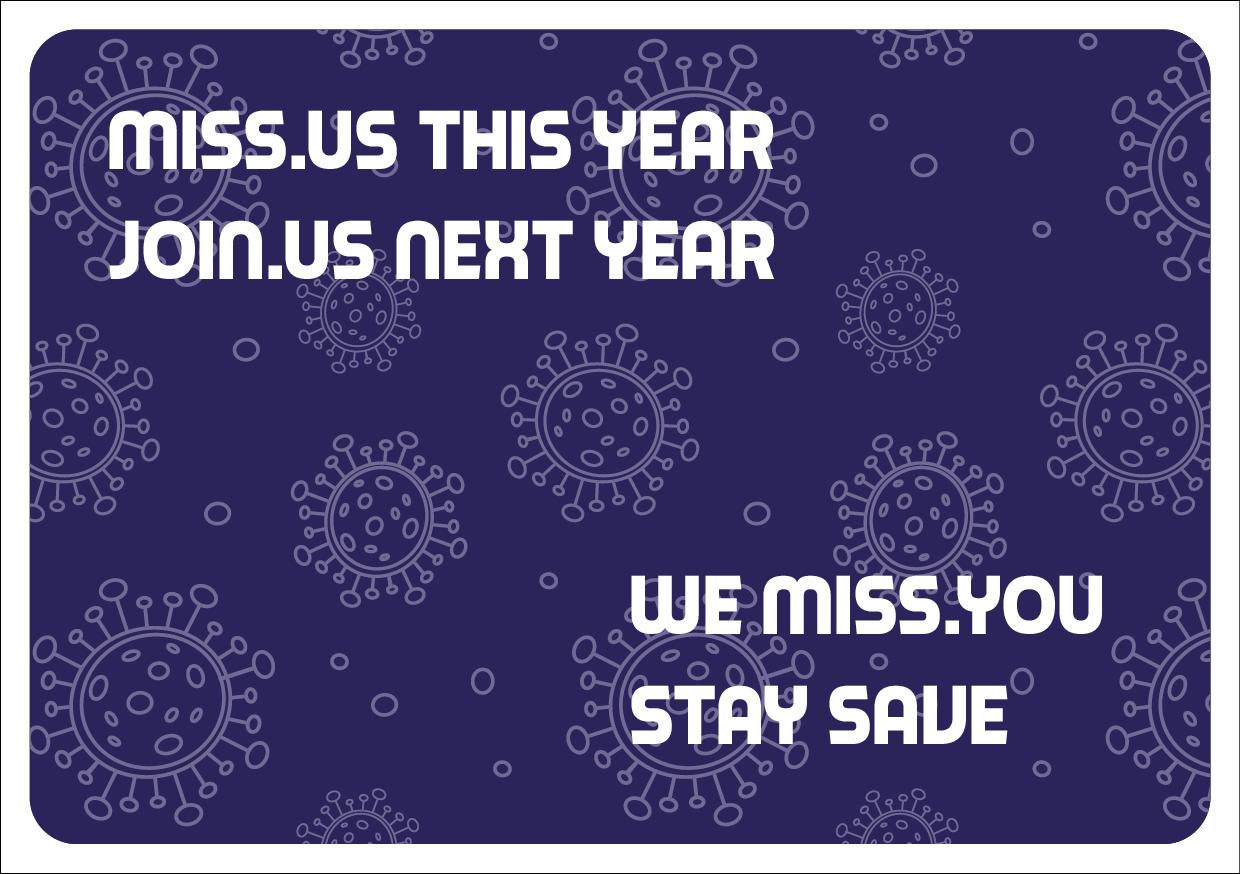 This year we are pleased to surprise you with a short film instead of our traditional customer aperitif 'join us'. So you can get in touch with one or the other member of our team, despite the existing circumstances. We wish you much pleasure and look forward to our event next year.

Praxis OrthoPlusBasel – is put into operation 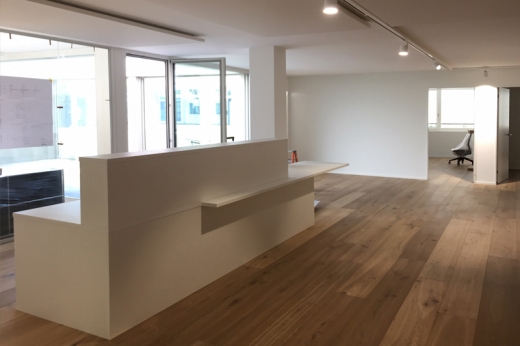 On the 1st floor of a newly renovated commercial building in Binningen-Dorenbach, a medical practice for 'orthopaedics' was built in on a total empty area of 410 m2. In addition to the reception/waiting area, the treatment rooms and an X-ray room, the practice also has a kitchen and two loggias for the practice team. The two large inserted loggias provide very good daylight conditions and some rooms are illuminated from three sides.

Construction work began in March of this year and the practice was put into operation in June 2020. 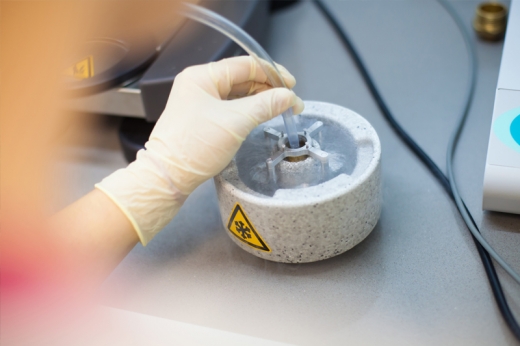 The EM Center, which will be completed in 2017, meets all the expectations with which Novartis started work on this facility in 2015. For this reason, the EM has been extended by a microscope.

Adaptation of the building services, especially in the areas of ventilation, air conditioning, cooling and radiation insulation, significantly increased the complexity of the project. A self-sufficient HVAC system was created, which does not affect the running system. The cooling ceilings for the new microscopy room were attached to the house cooling network, as were the air coolers. The room was conditioned according to the requirements. In case the temperature range could not be maintained, the entire corridor was preconditioned. The monoblock was already designed for the expansion scenario at the beginning. The underlay floor in the area of the stands was removed and the sensitive equipment was placed on a concrete base. Walls and ceilings were designed to match the existing EM. A Faraday cage was installed for final shielding. 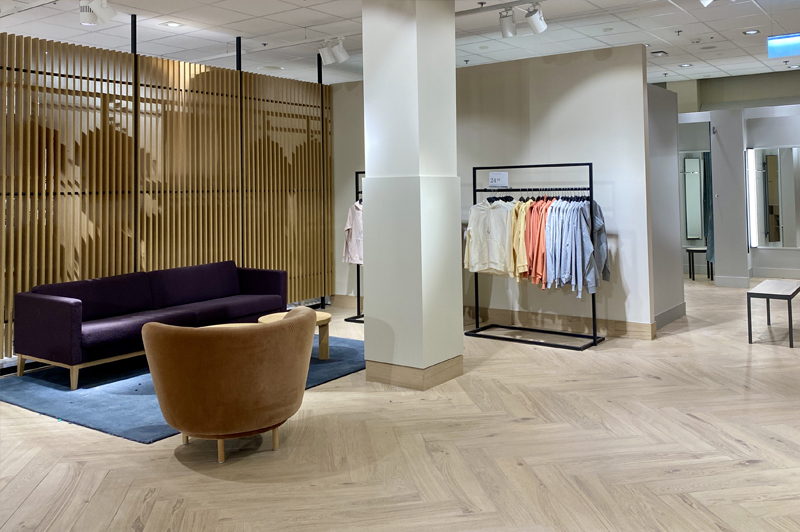 The H&M branch in the Shopping Arena near the St. Gallen stadium, which opened in 2008, was renovated and extended.

The existing 1,300 m2 of retail space on the ground floor and basement was increased by 700 m2 to a total of 2,000 m2 in the basement. The sales areas and ancillary rooms were redesigned in accordance with the new H&M design concept, with an additional lift being installed as a vertical connection to the existing escalator. Blaser Architects acted as general planners for the conversion. The work was carried out by the general contractor in four stages during ongoing operations and began in January 2020, with the opening of the retail spaces taking place in May 2020. 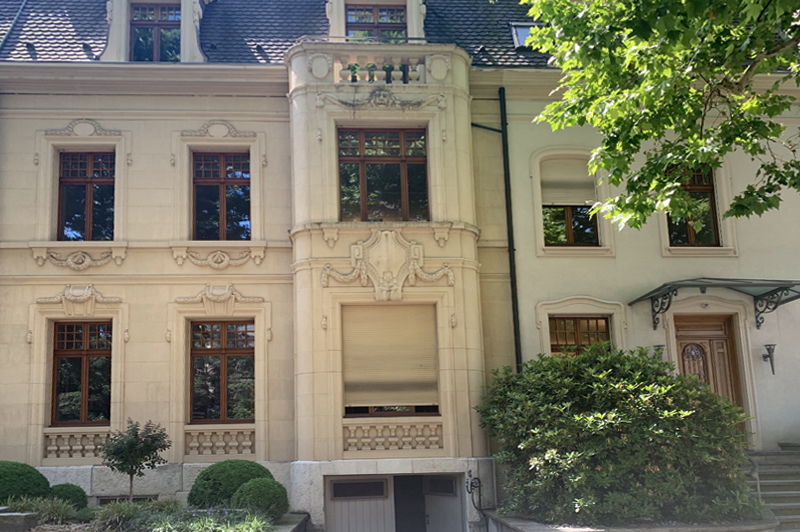 The historic building of Wirtschafts-Treuhand AG on Arnold Böcklin-Strasse in Basel, built in 1906, has been rebuilt and renovated several times. The former company flat on the 2nd floor was redesigned as office space, the existing offices were structurally adapted and refurnished. All surfaces were refreshed. However, the historical character was always retained in all the conversion measures.

Employees now have direct access to the courtyard garden and from the bicycle parking area into the building with new shower and changing facilities in the basement. On the ground floor, the entrance area, among other things, has been given a fresh design and a new open lounge with a kitchenette and, as originally planned, an exit to the garden has been created. All bathrooms have been renewed, the furniture and lighting in the whole house has been modernized and niches with built-in furniture have been used optimally. 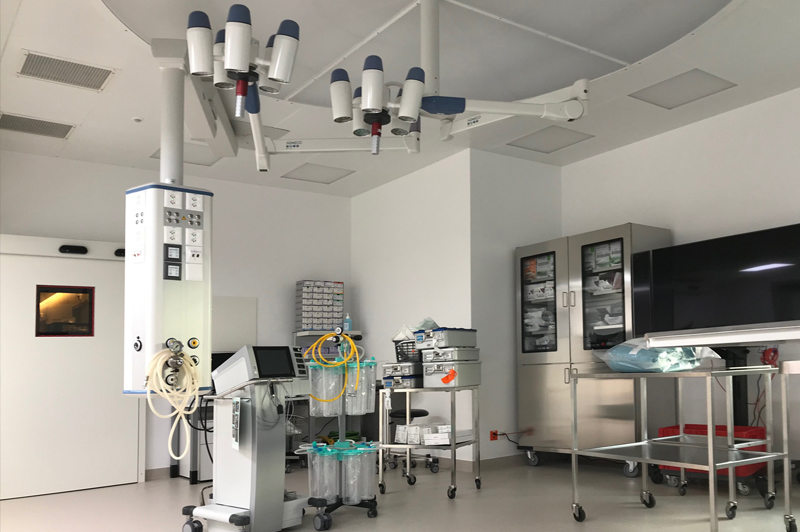 The conversion and renovation work was carried out during ongoing operations. A major challenge here was also the schedule of the clinic. The project started in June 2019 and operations in the operating theatres were able to start at the end of January 2020. The conversion was planned by Butscher Architects and realised by Blaser Architects. 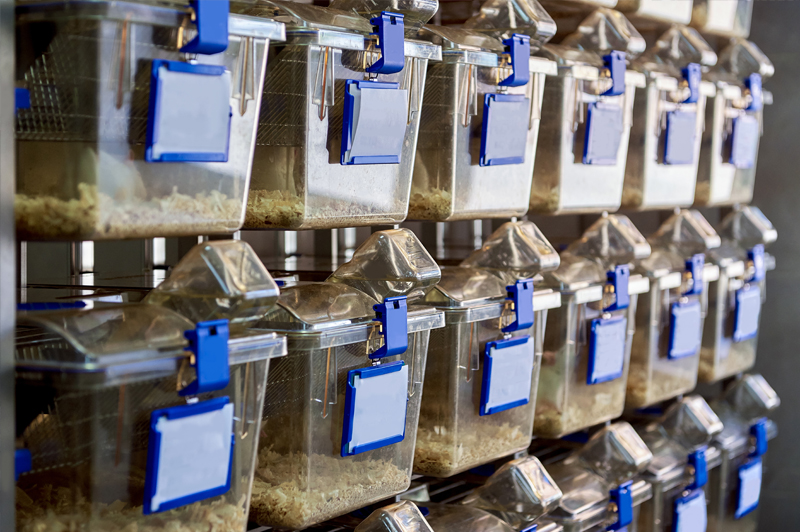 In a former laboratory building a research unit with animal station was installed on a floor area of 1'600 m2. On the first floor, in addition to the supply rooms, there is the vacuum disposal station and separate access for caretakers and scientists. On the top floor a new technical center was built due to the special use of the building to prevent possible cross-contamination with other uses in the building. The construction and operation of animal stables is subject to the highest standards of animal husbandry.

Six new animal housing rooms and the corresponding technical units were built to ensure the special room climates. Access of the keepers and access of the scientists is via the appropriate checkrooms into the hygiene zone. Only the cafeteria, which serves as a recreation room for the staff, is located outside the Animal Facility. 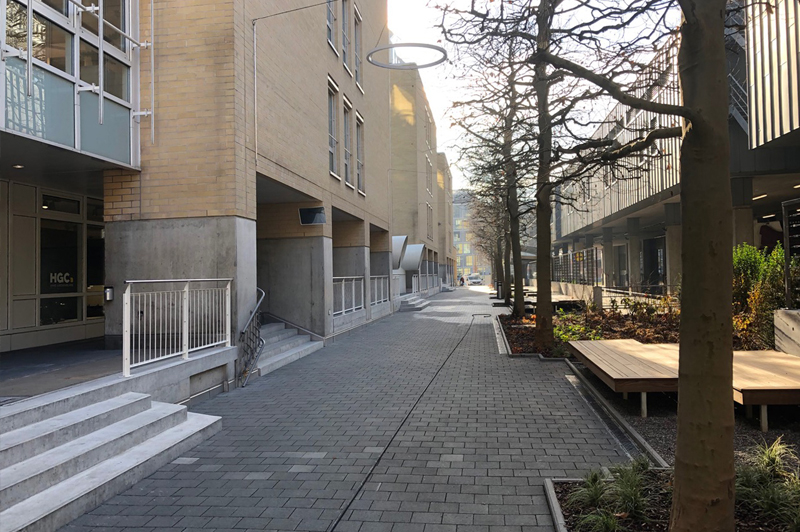 The construction work for the exterior design of the Carbahaus on Förrlibuckstrasse in Zurich was completed in January. The construction time was about six months. It led to an improvement in the access situation of the individual buildings and the creation of attractive outdoor recreation areas. The inner courtyards were opened and by moving the access stairs into the passerelle, a clear boundary was created for the tenants between private and public use. The proportion of green space around the existing plane trees was increased in favor of lingering on the new wooden decks. 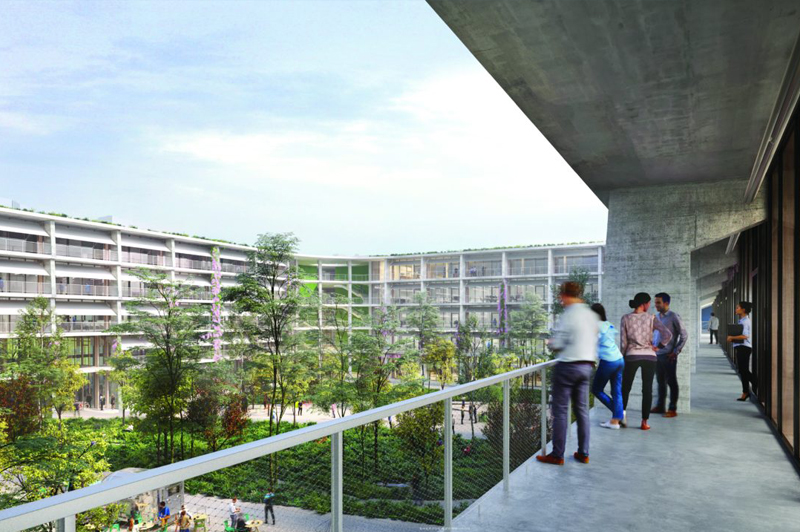 On the BaseLink site in the Bachgraben area in Allschwil, excavation has begun for the GRID innovation and commercial complex. The building was designed by Herzog & deMeuron.

Blaser Architekten AG were selected as general planners for the interior design of the anchor tenant SIP 2.0 'Switzerland Innovation Park Bark Basel Area'. The new building of the entire commercial complex will be constructed in two stages. From mid 2022 SIP will be able to move into the approximately 6'000 m2 rental space as part of the first stage.

Here, as a platform for the exchange of knowledge between publicly and privately financed research institutions and the business community, they will offer the following services: Flexibly usable infrastructures (offices, laboratories, workshops, common rooms); infrastructure-related services and innovation services Target groups are researchers from Swiss and foreign universities and research institutions as well as from Swiss and foreign large companies, SMEs and start-ups.

After the Technology Park in Stücki Park Basel, this is already the second project that Blaser Architects have been allowed to create for the target audience 'Research and Start-Ups'. Rendering: copyright Herzog & deMeuron